The following is an article I wrote back in the summer of 2009. Since December 9th, 2015 marks what would have been the late great Junior Well’s 81st birthday, and this year also commemorates the 50th anniversary of his debut album Hoodoo Man Blues, I thought it might be fun to re-post the archived piece. I hope you enjoy my musical memory… ~tbb

Flashback to the Mid Sixties


As most of you are aware, music was a big part of my life growing up. In the mid sixties, I was barely five years old, and my brother in his early teens. Nothing was cooler to me than hanging out with my brother. Back then he practiced guitar constantly, and those riffs he was working on were embedded into my earliest memories…

My brother grabbed his guitar case that was sitting in the corner of our basement rec room – right next to his Champ Amp. With vast pride, he took out his baby blue Fender Mustang, propped the guitar onto his shoulder; sneaking a peek in the mirror while plugging in his amp.

I sat down on the basement hide-a-bed. It had a cigarette burn the size of a lunch plate from one of my sister’s crazy parties. Shuffling through a few of his albums that were laying on his amp, my brother chose Hoodoo Man Blues by Junior Wells. Gesturing for me to be silent, he took the record out of its cover/sleeve, and placed it on the turntable. The stylus popped into it’s vinyl groove, and the room swelled with that sweet soulful sound! My brother enthusiastically played along… 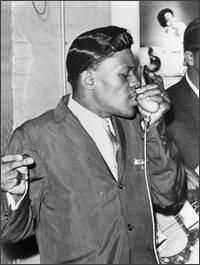 Junior Wells was born Amos Blakemore in Memphis, Tennessee on December 9th, 1934. For those unfamiliar, Wells was famous for performing with Muddy Waters, Buddy Guy, Magic Sam, Lonnie Brooks, The Rolling Stones and Van Morrison, just to name a few. Junior was also one of the major and influential players of Chicago’s vibrant, funky, electric blues sound in the late 1950’s and 60’s. His career would span over 40 years…

Raised on a farm in rural Memphis and Arkansas, Wells was inspired by the productive blues culture. He learned harmonica from Little Junior Parker… After his parents separated, Junior and his mother eventually moved to Chicago in 1946. It was here where Junior discovered his future.

In his teens Wells often played hooky from school; finding whatever time he could to practice his craft. He would sneak into clubs, vying to “sit-in” with bands… One classic story is where Junior convinced his sister and her boyfriend at the time (a Chicago policeman) to take him to Sam’s Ebony Lounge to see Muddy Waters band.

“I went up to Muddy and told him I played harp… Muddy said he’d let me try. Little Walter said, “That little shrimp.” They stood me on a coke box to reach the mike and I made $45 in tips.” ~Junior Wells

When Little Walter left Muddy Waters band in 1952, Junior got the call. He stayed with Waters until he was inducted into the army. However, he would go AWOL and create some of his first recordings during that time.

In 1957, Wells hooked up with producer Mel London, who owned the Chief, Profile and several other record labels. The association resulted in many of Wells’ most memorable songs, including “I Could Cry” and “Lovey Dovey Lovely One” in 1957 and the R&B influenced classic (and one of my personal favorites) “Messin’ with the Kid” in 1960. 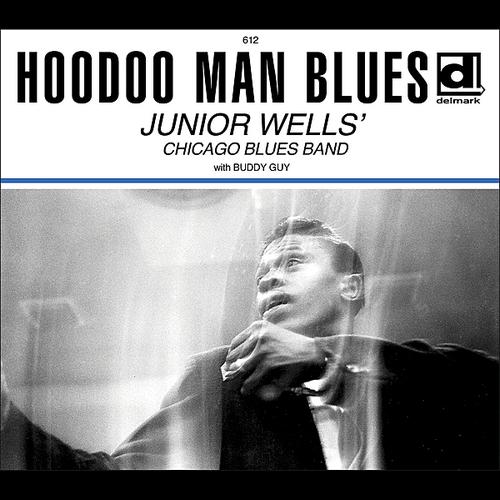 Junior was best known for his 1965 debut album Hoodoo Man Blues on Delmark Records featuring Buddy Guy on guitar. The album emulated the smoky atmosphere of the era’s Westside Chicago blues bars. It made an impression on many people. For me, Hoodoo Man Blues will always remind me of some the first audible sounds that I recall.

As time progressed into the mid-seventies, and after opening for the Rolling Stones with Buddy Guy in that time frame, little was heard of Wells on vinyl. He did however continue to have mass appeal at home and abroad throughout his career.

In 1997 on his album entitled Come on in This House, the critics took notice once again. It would seem that Junior was on the comeback. The album even won the W.C. Handy Blues Award ( known now as The Blues Music Awards) for Traditional Blues Album.

Wells remained a powerful live performer. With one mesmerizing blast from his amplified harmonica, he would gain the respect of everyone in the room. Junior continued to perform until he was diagnosed with lymphatic cancer in the summer of 1997. That fall, while undergoing treatment, he suffered a stroke; sending him into a coma. Wells passed away in January 1998.

There are several compilations that were released after his death, as was the film Blues Brothers 2000, where he had a cameo appearance…

Back In The Mid Sixties

There was always these cool musical moments that took place in my household. Eventually my brother added his friends to the practice sessions. Soon he really got his chops down, and this lead to some serious rehearsals in our basement on the weekends. As a result, my interest in music grew watching everyone rehearse.

Often there were audible music wars in the house as The Monkees, The Beatles and Paul Revere & The Raiders were blasting from my sister’s bedroom. But to me, even though I was so young, it was the blues that truly stuck in my mind. It seem to come from somewhere deeper inside.

Do you have any favorite songs or memories of Junior Wells that you’d like to share? Please add your comments below. I’d love to hear from you…