It was difficult leaving Indianola. I had a really good lunch at The Crown Restaurant and an inspiring visit at B.B. King Museum and Delta Interpretive Center.

Walking Back Onto the Bus

my mind was preoccupied with thoughts of the museum. Snapping out of my trance, I realized I was the last person on the bus… It wasn’t my intention to hold everyone up, but I guess that can happen when you get lost traveling through time.

The next stop on our Mississippi Delta tour was Greenwood. The city is located roughly 90 miles north of Jackson and a 120 miles south of Memphis at the eastern edge of the Delta. Good thing it was only 30 minutes away from Indianola as it was getting late. And we still had to check into the Hotel for our last night in Mississippi.

We arrived at The Hampton Inn and after a quick change of attire, we were back on the road and touring Greenwood. We had several places to see before we all met up for our wind-up dinner at The Delta Bistro…


In blues folklore Baptist Town is known as the last place where Robert Johnson lived – as told through the reflections of David “Honeyboy” Edwards.

This neighborhood has suffered most of its life through tough times, and that continues to be visibly obvious today. Hopefully the Baptist Town Re-vitalization project will continue to re-develop the area and help re-store the historical significance it so rightly deserves.

I wasn’t familiar with the movie The Help.  However, I quickly learned that the movie received four Academy Award nominations including best picture, best actress and two best supporting actress nominations – with a win for best supporting actress Octavia Spencer in the role of Minny Jackson during the 2012 Academy Awards. The novel (same name as the movie) sold over five million copies and spent more than 100 weeks on The New York Times best seller list.

I was really taken by surprise on this excursion – the house is beautiful and we were welcomed by current owner Webb Franklin who was gracious and informative. We also got a few sniffs and a warm greeting from their dog Skeeter. (Named after the lead character in the movie) Mr. Franklin shared his stories regarding the film and the transformation his home took during the production. This was a very cool experience and one I’ll long remember.

Along Howard Street you’ll find some cool shops like Turnrow Book Company, Rachael’s Boutique and Fincher’s Inc. The streets were impeccably clean and the atmosphere was scenic and interestingly tranquil.

We also drove past the Viking Range Company– long time manufacturer of high-end kitchen appliances. With more time, I would have definitely signed up for a tour of the facility. They also have a cooking school where they feature a number of different themed courses; like how to make Southern dishes featured in the movie The Help.

The Winery at Williams Landing 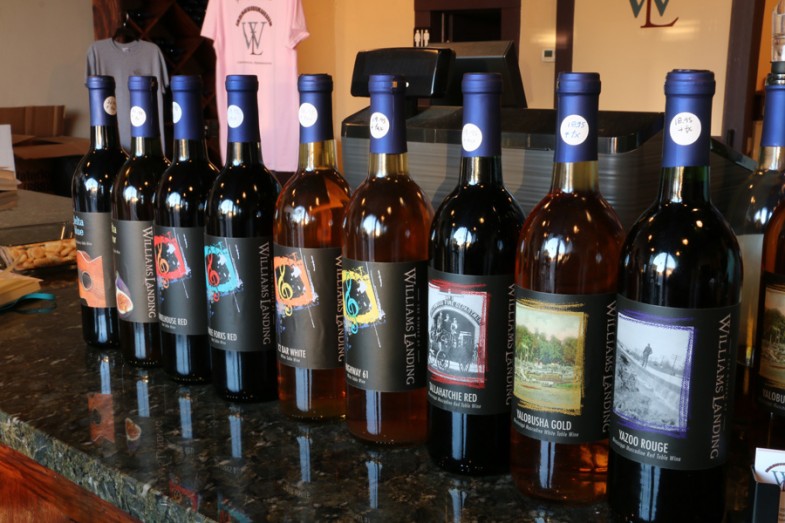 This winery is located in an old converted fire station. The owner told us stories about the history of Greenwood and how they got involved in making wine. And discussed all his popular wine labels made from muscadine, figs, blueberries and an assortment of other fruits.

I got the opportunity to sample several of the wines featured in Mike’s photo above; my favorite was the Yalabusha Gold.

It was approximately 8:00pm and we all got together at the upbeat and trendy Delta Bistro. There was some amazing selections on the menu like smoked elk, fried rabbit tenderloin, duck ragu and garlic risotto, as well as fried alligator. I chose the lighter grilled salmon salad option.

The food mixed with the stylish atmosphere and great company made for a delightful evening.  After dinner we all went back to the hotel and retired for the evening after a huge day of touring.

Several of the travel writers in our group left for early morning flights. Those who remained all met on the bus and we went for breakfast at the luxurious Alluvian Hotel. This historical building and its chiseled elegance presented for a classy breakfast setting on the outside terrace. For some of us this was goodbye as we took the 2 hour drive after breakfast to the airport.

With several hours of free time before our late afternoon flights, the people remaining from our group moved into Lisa’s vehicle and headed to Beale Street. We all took a quick walking tour of the area. We sauntered past Handy Park, briefly checked out The Peabody Hotel and a few of the shops down Beale Street – where we had some lunch.

I hung on to every moment for as long as I could, but soon enough we were all at the airport saying our final goodbyes. On board my flight back home I recalled having such a great time! I truly appreciated the opportunity to finally see The Mississippi Delta, and all the great people I met along the way.

Mississippi has a way of getting inside your soul. The history, people, music, food and the warm Southern hospitality is something I will long remember. As my plane climbed through the overcast sky, Mississippi slowly faded away, but never from my fondest memories.

The video featured below was pieced together by Mike from Mikesroadtrip.com. I thought he did an excellent job summarizing our entire Mississippi Delta Trip.

Have you been to Greenwood Mississippi? Are there any places or events you’d like share? Please feel to add your comments below.