“I really wanted to feature John’s keyboard playing on this record. He’s truly one of the most lyrical, economical and under rated keyboardists around. We also wanted to change things up a bit after the success of “A Special Life” and the addition of a horn section on several tracks was a really fun way to do that…” ~ Eric Corne – producer

John Mayall has been on a bit of a roll lately. After going 5 years without releasing a new album, he’s signed with 40 Below Records and put out two exceptional records in the past few years. He also released a never before heard Live in 1967 Bluebreakers album  – featuring the classic paring of Peter Green (lead guitar), John McVie (bass) and Mick Fleetwood. (drums)

Now almost 82 years young, his latest album Find A Way To Care was released last week. I got the opportunity to hear this album this past weekend, and I really got caught up listening to it. It’s an extraordinary recording. His current band of Rocky Athas (guitar), Greg Rzab (bass) and Jay Davenport (drums) sound fantastic! Collectively the band has been together for almost seven years, and the rapport is quite apparent.

People familiar with John Mayall know how influential and important a musician he’s been over the past 50 years. Mayall is responsible for introducing and influencing some of the most famous and creative musicians ever to the blues genre. There’s a good reason Mayall is known as “The Godfather of British Blues.” For me, it was the sounds of John Mayall that were responsible for some of my first audible memories. So inspiring, Mayall became the subject of my very first blog post back in October 2007. Yes, it’s The Blues Blogger’s 8th Anniversary coming up. But that’s another story…

Find A Way To Care 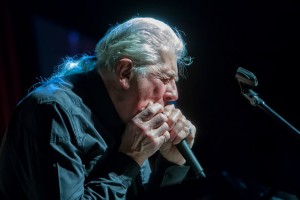 The fun begins with a cover of Don Robey’s catchy shuffle “Mother-In Law Blues.” Mayall’s distinctive voice and harmonica are solid along with his Hammond streaming through the instrumental bridges. The tone changes with the addition of a horn section on Percy Mayfield’s upbeat “The River’s Invitation.” Rzab’s fret-less bass line entwines with Davenport’s drums, and along with Mayall’s tasteful stylings, create a prodigious cover of this classic original.

On the first of Mayall’s five original compositions, “Ain’t No Guarantees,” the band leader’s keyboard-driven phrasing and vocals are strong and continue to impress. The entertaining funky grooves continue on Sam Hopkins “I Feel So Bad.” Jay Davenport’s drumming is especially outstanding on this cut.

On the title track, another Mayall original, he gets reflective, “looking back where I’ve been. I’m still following my dream. I’m gonna take it easy. Gonna do the best I can.” If you’re familiar with Mayall, you’ll connect with the sentiment of this one. A great all-round feel with some nice fret-work courtesy of Rocky Athas. Track six delivers a terrific version of Muddy Waters’ “Long Distance Call.” alongside some outstanding piano and muted electric guitar exchanges. 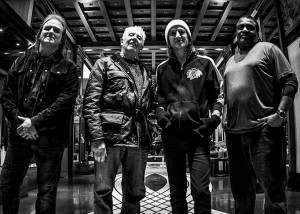 The second half of the album starts out with the Lee Baker Jr (AKA Lonnie Brooks) rocker “I Want All My Money Back,” that once again showcases the whole band’s spontaneity. If I had to pick my favorite on Find A Way To Care, it would be the album’s eighth track “Ropes and Chains.” Written by bassist Greg Rzab and Mayall, it’s has a great foot tapping vivacity with great musical interchanges and a contagious feel. I found myself coming back to this particular cut a lot. “Long Summer Days” is yet another Mayall original that takes a look back at his youth in England. The slow blues cover of Charles Mose Brown’s “Driftin Blues,” is played with impeccable feeling and will having you grooving with every beat.

Mayall includes two bonus tracks “War We Wage,” co-written by modern blues master Matt Schofield that continues the great vibe along with an outstanding guitar solo. The last track, and another Mayall original “Crazy Lady,” has him contemplating some moments from the past in a boogie-woogie fashion. 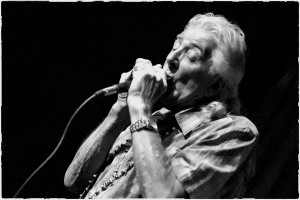 Mayall’s often comments that his current band are the best musicians he’s ever played with. To his hard-core fans this will certainly be up for debate. But you can’t argue about Mayall’s knack for spotting and orchestrating exceptional talent. He knows how to naturally get the best out of all his players.

When I first heard John Mayall back in the sixties, I was way too young to realize what was going on. I was just a slave to the grooves around me. Mayall captured my fascination and fed my imagination – as he did for so many others… It’s so cool to see him going strong after all these years. And sounding pretty damn good too! The reflective stories on the new originals and masterful touches to old favorites on Find A Way To Care is very entertaining. This is an album that will appeal to old and new Mayall fans alike, and one that I highly recommend.

For more information on John Mayall and his latest tour schedule, you can click on the link right here… Have you heard the new release Find A Way To Care by blues legend John Mayall? Have you witnessed him and his band play live before? Please share your thoughts in the area below:

One Response to “John Mayall: Sensational New Album – Find A Way to Care”