“I didn’t record for six years from 1972 to ’78. For about a year, I stopped playing completely. My landlord was a contractor, and I started doing work with him. My wife told me ‘this ain’t you, you’ve got to keep up with your music’ which I’m proud of her for telling me that.” ~Albert Collins

I remember the time very well… My parents owned a small convenience store and I lived in the two bedroom apartment above. I somehow convinced my mom to let me move up there when I was only 14. By 1978 I was already living there for close to 4 years. It wasn’t a free ride, I worked in the local record shop in addition to helping my parents out with the business. But on the evenings and weekends that pad above the grocery store became party central. I even devoted a whole room so my friends could jam. It wasn’t like the basement rehearsals we had in our house growing up in the sixties, but it did the trick…

It was at this point in time I had my largest collection of vinyl LP’s. Having my own apartment at such a young age was wild, and I remember for the first time really having the freedom to crank up the volume on some of those records in the evening. This is when I started digging the “cool sounds” of Albert Collins. And the album Ice Pickin’ was one of those records that got a lot of spins on the phonograph back then… 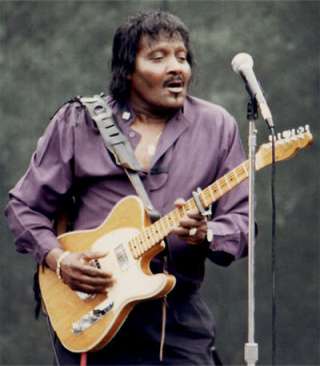 was born on October 1, 1932, in Leona, Texas, but moved to Houston in 1941. A distant cousin of the legendary Lightnin’ Hopkins, Collins was influenced by the blues sounds of the Mississippi, Chicago, and especially Texas. In his early teens Collins gained inspiration listening to keyboardist Jimmy McGriff and began playing piano and organ… Switching to guitar at 18, he entered the blues scene with a unique sound and approach. Influenced by great blues artists such as T-Bone Walker, Gatemouth Brown and John Lee Hooker, Collins formed his own band in 1952 and packed the clubs around Houston.

In the early 1960s, Collins hit the airwaves big time with Frosty. This song was also known for having a young Johnny Winter and Janis Joplin in attendance in the studio while the song was being recorded. Other single releases like Sno Cone and Thaw Out were heavily played on R&B radio stations. In no time Collins was sharing stages with many of his idols.

In the mid 60’s Collins broke into the rock ‘n’ roll scene with three albums produced by members of Canned Heat, and shortly after played the San Francisco psychedelic circuit. Collins really got the recognition he deserved after he signed with Alligator Records and released Ice Pickin in 1978. It won the Best Blues Album of the Year Award from the Montreux Jazz Festival and was nominated for a Grammy.

Throughout the 80’s and early 90s Collins continued to tour worldwide. He gained further recognition and would go on to influence other artists such as Gary Moore, Stevie Ray Vaughan, Jonny Lang, Susan Tedeschi and John Mayer.

Collins won the WC Handy Award for Best Blues Album of the Year in 1983 for his record Don’t Lose Your Cool and shared a Grammy with Robert Cray and Johnny Copeland for the album Showdown in 1985. He also performed at Live Aid alongside George Thorogood and the Destroyers at JFK stadium and was nominated for another Grammy in 1987 for Cold Snap. Also known as The Iceman and The Razor Blade, Collins feisty appearance in the 1987 movie Adventures in Babysitting, along with various television performances, brought his unique style and tone to an entirely new audience.

Albert Collins recorded his last album Live 92/93 after being diagnosed with cancer. Sadly another great blues master passed away later that fall in 1993. His legacy will forever live on in the music he leaves behind and the artists that he inspired both past, present and long into the future.

One of the greatest things I love about music is its ability to transport you back through time… Listening to Collins’ 1978 release Ice Pickin’ this past weekend after so many years was not only a cool reminder of the music legend’s magic, but a reflective look at some of my crazy teenage daze… Are you familiar with Albert Collins? Any favorite moments in Collins’ rich musical time line that you recall?

Tags: blues, master, of, telecaster, the

15 Responses to “Albert Collins: Master of the Telecaster”