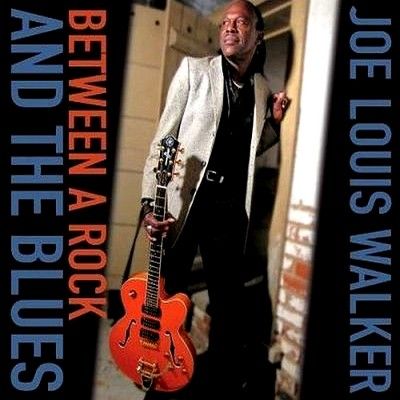 Even though it’s The Blues Blogger’s 2nd Anniversary this month, it didn’t me give me an excuse to not work on a few lingering fall projects around the house. I usually allot time in the afternoons on the weekend to listen to some of the music that grabs my interest and complete some of these tasks. I’ll put on my earphones and let the feeling the music brings assist in keeping me motivated. And then Saturday or Sunday night I’ll sit down and write the majority of articles you read here…

Joe Louis Walker’s latest release Between A Rock And The Blues didn’t land on my desk by fluke. I was really looking forward to this one. Last year’s Witness to the Blues on Stony Plain Records was a fantastic mix of many genres tastefully produced by music legend Duke Robillard. I heard JLW would play a few different things and perhaps discover a bit more of his rockier roots this time around… As I pressed play the enthusiastic opening cut “I’m Tide” instantly grabbed my attention and stopped me dead in my tracks…

Immediately I thought, “Projects around the house? I don’t think so.” I was too knocked out for any of that! Not this afternoon anyway. Instead my eyes veered at one of my guitars that hung on the wall. Even though I thought about it many times before, it had been over a year since I took it down. It only took ten minutes of listening to Between A Rock And The Blues to make it actually happen.

Starting where Witness to the Blues left off, songs like “I’m Tide” and Travis Phillips’ “Eyes Like a Cat,” with it’s honey dripping groove and the soulful horn laced “Black Widowed Spider,” (Walker’s personal recollection of his past marriage) were simple yet well produced catchy tunes with first class musicianship. Most of the songs on this release are bit of a mixed bag, but that’s not a complaint. They are definitely well constructed tunes that are upbeat and infectious. Walker really showcases his extraordinary song-writing skills on this record…

While listening to the album’s fourth cut “If There’s a Heaven” I quickly learned some of the chords and then drifted off wherever the music took me. “If There’s a Heaven” and its gospel textures features former The Tonight Show director Kevin Eubanks on guitar on one of two tracks that was co-written and recorded at Eubank’s studio in Los Angeles. The other is “I’ve Been Down,” an upbeat number reminiscent of The Stones at their finest…

Now I’m not a guitar player and I will never pretend to be, but the music on Joe Louis Walker’s Between A Rock And The Blues took something over inside of me. It didn’t matter how good, bad or ridiculous I may have sounded playing the guitar. That wasn’t the point, because in my mind I felt like I was jamming along pretty good and there was no one else around to tell me otherwise. I didn’t fight it; I just let my mind drift as I played along to the rock filled riffs and catchy heartfelt tunes.

was born on December 25, 1949, in San Francisco. His parents were migrant farm workers from Arkansas. When they moved to California, the family brought along their extensive collection of 78 rpm blues recordings. Walker grew up listening to these sounds and was drawn to them. His family was religious, and gospel music became a central focus. As a youngster, Walker would sing gospel at his grandmother’s church, and then professionally in his early career. He never let go of his gospel roots and it serves as the underlying theme for most of his music.

During grade school he was captivated by all the different musical instruments. And Walker would take home and experiment with as many as he could… At the age of 12 he bought his first guitar and he began to play. He took lessons at 14 and learned techniques from his cousins, who at the time had formed a band. Walker started to play the clubs in his early teens, but his fixation would lead him to ignore his schoolwork. As a result his studies suffered until he stopped attending school altogether. This led to an ultimatum by his father of returning to school or leaving home. Accepting the ladder, Walker went his own way at 16.

Shortly after leaving home he became friends and roommates with Mike Bloomfield. Together they often performed at The Matrix in San Francisco; a popular club where the guys often performed as an opening act for stars like Muddy Waters. Opportunities unfolded and Walker would make the acquaintances of prominent professional blues men such as Lightnin’ Hopkins, Freddie King, and John Lee Hooker. He also found himself jamming with the likes of The Grateful Dead and Jimi Hendrix, just to name a few.

After the Death of His Friend Mike Bloomfield

Walker reassessed both himself and his career. He changed his lifestyle, enrolled in college and earned degrees in music and English. In those days he performed regularly with the Spiritual Corinthians gospel group.

Returning to the blues in 1985, he put together his band The Bosstalkers and signed with HighTone Records. There he released five albums. Then he moved to PolyGram’s Verve/Gitanes label and recorded six more albums. Walker has also performed on countless records as a guest with artists ranging from B.B. King to Peter Green…

In 1988 he performed for President George H. W. Bush at a musical presentation called “The Celebration for Young America”, playing alongside Stevie Ray and Jimmie Vaughan, Joe Cocker, Ron Wood, Willie Dixon and Koko Taylor, among others.
(photo by Robin Poritzky-Walker)

“My dream was always to play my music in as many different places as I can; that’s why I admired Louis Armstrong and why B.B. King and Buddy Guy are heroes for me — they always kept their music fresh by reaching out to new audiences all the time.”

Ten of the tracks on Between A Rock And The Blues were once again produced by music wizard Duke Robillard, who also guests on the swinging “Tell Me Why.” Murali Coryell (son of jazz/rock fusion guitarist Larry Coryell ) wrote “Way to Expensive,” a tune that comments on the current economic situation. And then there’s one of my favorites I played several times over; the haunting and emotional eighth cut “Hallways.” Some of Walker’s covers like Ray Charles’ “Blackjack,” Roy Gaines’ “Big Fine Woman” and Travis Phillips’ “Eyes Like a Cat” are fantastic additions that add a nice balance to this wonderful and rousing recording.

The album’s title is not totally just a play on words. Walker proves without a doubt that he is the real deal and is a force to be reckoned with. With all his musical experience, Walker explores his blues influences and takes them to new heights. With this release he creates an electrifying surge of creative energy that while often exploratory, remains firmly entrenched somewhere between a rock and the blues…

I soon realized that nothing got done around the house this past weekend. Oh well, it’s doesn’t happen often. Besides it’s my Anniversary! (Well I’ll try using that as an excuse and see what happens.) Coming back from little trip, I now hang up my guitar and turn this post over to you… Were you aware of Joe Louis Walker’s San Francisco musical roots? Have you heard Between A Rock And The Blues yet? If not, you should! JLW is an exciting musician with a smart, witty and impressive song-writing flare… Please feel free to comment below. Your input as always is appreciated and helps enhance the article.

15 Responses to “Joe Louis Walker: Electrifying New Album Between A Rock And The Blues”