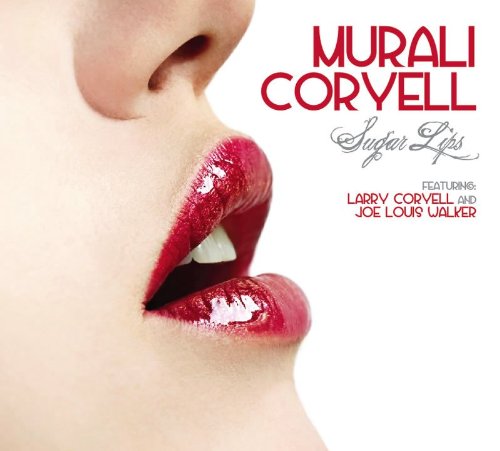 A few weeks back I received a message from a friend informing me about a new release by Murali Coryell called Sugar Lips. This immediately brought to mind an album review I did last October for Joe Louis Walker’s latest Between A Rock And The Blues. There were many memorable moments on that record and the song “Way Too Expensive,” a tune Murali wrote was one of them… Now I must admit when information of Coryell’s CD was sent to me I was feeling kind of lousy. No particular reason. Hey, these things happen! However, that didn’t stop me from being curious. So after taking a listen to some clips on cdbaby, I immediately downloaded the album. I really enjoyed the finger snapping grooves and genuine sentiment that’s expressed on this album.

This musical journey opens with the buoyant boogie “Blame it On Me”, and then continues with two highly addictive numbers, “What You Gonna Do About Me” and “Closer To You Baby.” It was at this point I could sense my mood taking a quick turn for the better… I found myself particularly moved by the expressive and poignant fourth track “Mother’s Day.” The song is a tribute to Murali’s mother author/actress Julie Coryell who passed away last May. Murali poetically captures a difficult moment in time; opening a door that allows us to share his thoughts and feelings.

Coryell is a terrific songwriter/guitarist who also has a smooth soulful voice. There is a whole lot of passion happening on this CD, and the well constructed tunes kept coming on “What Works On You” & the title cut “Sugar Lips.” 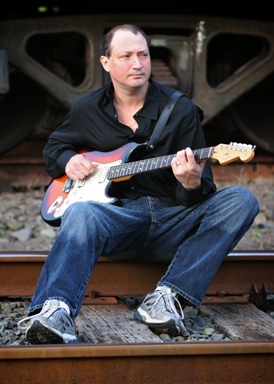 Earning degrees in music theory and composition while in college, Coryell got his start by hosting blues jams in upstate N.Y in the early 90’s. During that time he gigged with artists such as Ritchie Havens and Duke Robillard. Over the course of his career, he’s recorded the songs of Sam Cooke, Al Green, Jimi Hendrix, Muddy Waters, Charles Mingus and Marvin Gaye. He’s toured with B.B. King and also played with Buddy Guy, Levon Helm, George Clinton and George Thorogood among others.

The son of jazz fusion guitarist Larry Coryell, Murali grew up surrounded by music legends such as Carlos Santana, Jack Bruce, and Miles Davis just to name a few. He even wrote a song called “In The Room With Jimi” that depicts a time as an infant in San Francisco in the early seventies when he was brought along to the Fillmore East where his father was playing at the time. There Jimi Hendrix came by to hear his father Larry play and afterward Hendrix came backstage and stood over Murali’s bassinet to check him out.

Flashing back a little (although a very different style and time) I remember listening to Murali’s father Larry play with his band Eleventh House, and also some of his work with guitarist Steve Khan. So it was really cool to see him featured on Sugar Lips.

Murali’s first CD Eyes Wide Open was released in 1995. His previous album “The Same Damn Thing” in 2008 has been featured in Guitar Player Magazine, Elmore Magazine and Blues Revue. In total he has recorded six solo CD’s in addition to collaborating with his father and brother Julian on the album The Coryell’s. His work has also been heard on NBC’s “Crossing Jordan.”

Getting Back to the Last Half of Sugar Lips

There are several standout tunes like the elegant ballad “I Could’ve Had You,” and the edgy “Still Rockin.” The 9th and 10th tracks “Minor Funk” and “I Still Do” features Joe Louis Walker which show the indisputable chemistry between these two guys. Those four songs display a nice mixture of blues/rock, funk and melodic fortitude. And the hypnotic sound of the last two songs “Music Sets You Free” and the closer “Where Is The Spirit?” really captured my imagination.

Sugar Lips was a real mood changer for me. It’s a perfect example of the affect music has when something this fine comes your way. While listening to this album many times over I discovered the honest upbeat atmosphere that was generated really livened up my mood. Now that’s a Christmas present I’m confident will last throughout the holiday season and well into the New Year.

So now it’s your turn. Have you heard of Murali Coryell and his new release Sugar Lips? Did you checkout the link located above and listen for yourself? Let me know what you think by adding your comments. Let’s spread the word about this awesome new release… For information on Murali Coryell you can go to his website by clicking here.

All The Best This Holiday Season,