As my 15 year old son and I settled in to watch the Super Bowl last week, we were surrounded by an assortment of munchies on the table in front of us. Unfortunately I was feeling a little down, and my son was rather fretful about my demeanor. This was the Super Bowl and there was no reason to be bummed…

I told my son that earlier in the day I heard the news about the death of Gary Moore. He was one of my favorite guitar players and that was the reason I felt rather cheerless. “Dad you need to write something. It might make you feel better,” he replied. I knew he was right, but what would I say that could do proper justice to a player that so many others had long admired? Wincing with awe makes for difficult adjectives at times. 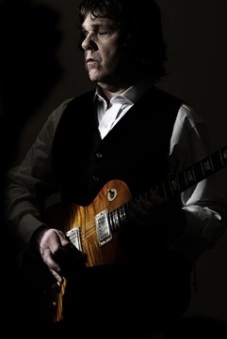 It took a week, but I soon realized I was never going to get the right words that would articulate my appreciation for Gary Moore. He will forever stand out as one of those musicians that had a unique blend of versatility, tone and technique. And he did it with immense emotion. I decided not to over-think things and just do my best to weave together a brief tribute to a man who provided so many years of listening pleasure.

was well underway now and Green Bay was looking strong. I caught a side glimpse of my son, and I thought to myself that I was approximately his current age when I first came across Gary Moore’s music.

This was a memorable year for me. I was going to high school and I also worked at a record store on the weekends. I would also discover new aspects of life like driving a car, different styles of music, making new friends, I got more involved with recording gear, and of course there were girls.

One of the things I also enjoyed was vinyl album art. Those covers act like time capsules; capable of taking you back to memories of yesteryear. It was this fascination that introduced me to an LP called Strange New Flesh by Colosseum II. My initial introduction to Gary Moore was on this record. And it was some of those new fusion, progressive rock and jazz sounds that became a new source for memories that would eventually act as a link to my mid to late teenage years.

I would buy LP’s like Strange New Flesh, and when I got home, crank the volume on my stereo in my room; playing songs like “Darker Side of the Moog.” And in doing so, drive my father absolutely crazy!

(Now, if you had to pick a few songs that take you back to some of your mid-teenage years, do you know what they’d be?)

For me I can clearly name two and they were both released in 1976. One is “Fooled Around and Fell in Love,” by Elvin Bishop and the other would be “The Boys are Back in Town” by Thin Lizzy. These are two staples from a time that metaphorically provides the bridge I crossed leading me to paths beyond teenage innocence.

Born in Belfast Ireland on April 4th, 1952, he started playing music at the age of 8, and developed his style right handed despite being a lefty. He was influenced by the likes of Elvis Presley and The Beatles, and then later by musicians like Jimi Hendrix and John Mayall, which opened him up to the art of the blues.

Aspiring to become a musician, Moore moved to Dublin at 16 and joined Skid Row, along with Phil Lynott. In 1973 Moore would once again unite with Lynott but this time in the band Thin Lizzy.

Moore became the protégé of blues pioneer Peter Green, who he admired since the days of the Blues Breakers. He even obtained some of his guitars when Green quit the music scene. Many of Moore’s albums features Green’s famous sounding 1959 Gibson Les Paul, and attributed to his identifiable sound and voicing. It was Peter Green that helped mold the career of the young Moore, and his deep appreciation of Green can be heard on his album, “Blues for Greeny.”

He sustained a career that received the respect of all the major players, including the likes of blues man B.B. King and many others who Moore graced the stage with.

Gary Moore preferred to better his technique and expose his true self rather than enjoy commercial success. After a string of rock records, Moore returned to blues music with Still Got the Blues, with contributions from Albert King, Albert Collins and George Harrison. This was his most successful and critically acclaimed album. And is a must buy for any electric blues fan who likes their blues with an extra punch.

He continued his blues recordings until 1997, when he decided to experiment with contemporary dance beats on Dark Days in Paradise. With Back to the Blues, Moore return to his tried and tested blues format in 2001 and continued with this style on Power of the Blues (2004), Old New Ballads Blues (2006), Close As You Get (2007) and his last recording Bad For You Baby (2008).

got more interesting in the second half as we all know. And as I started to get more involved, it took my mind off some of the things that were on my mind. And by the end of the game I was feeling a little better. My son was right when he reminded me that writing, along with positive memories would be good medicine.

Moore’s ability to hold his own amongst such influential company as shown in these videos is a testament to his enormous talent and respectability. He will forever be missed, but his music will live on in the hearts and souls of the people he touched forever.

There are so many musical moments in Gary Moore’s career which are impossible to cover in just one blog post. Perhaps we can continue our thoughts by including them in the comment area below. What are some of your favorite songs performed by Gary Moore? Do you have any stories about Gary you’d like to share?