With this album we wanted to explore a ‘world’ feeling, and this was the inspiration behind going to record in Greece and using some of the best Greek musicians to add a little flavor to a couple of tracks. But it’s by no means a ‘world’ album. We wanted Joe’s usual youthful and energetic tones to play alongside the worldly vibes of the Greek bouzouki and clarion… ~ Kevin Shirley (producer)

The First Weekend of Spring 2010

It’s Sunday afternoon and as usual I have the house to myself. After the long winter season I can finally open the windows and let the temperate breeze flow throughout my home. Don’t you just love spring? So this weekend I decided to work on some projects around the house… well… uhh… perhaps attempt to anyway. I also wanted to spend a little time writing and put together this week’s blog post. Furthermore it keeps me in touch with my many friends and readers of The Blues Blogger.

Just as I took a deep breath to savor the splendor of the day, my obnoxious next door neighbors from hell stormed out their front door to raise havoc. Their shrill oblivious presence and resulting backlash of aggravated barking dogs from all over the area, began turning my calm mood into a stressful state of affairs. 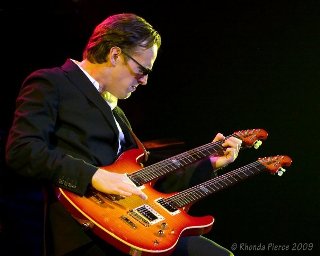 Now normally when this situation happens, I’ll put my earphones on my MP3 player and listen to some music to block out the noise. But the level of distraction was too much this time. And I really didn’t want to close my windows, so I decided to fight back for a change…

Instead of silently listening to my MP3 version of Bonamassa’s upcoming release Black Rock, I grabbed my promotional copy of the CD and made sure every window was open in the house. Cranking the volume on my audio system to levels I’ve never explored before, my mood eventually shifted from tension to joy; generating a vibe that would rock my entire neighborhood.

The sound levels sent perplexed head cocked glares from my annoying neighbors; dragging their knuckles as they eventually made their way back inside. Yes, the music was loud, and I mean LOUD. I haven’t played tunes at that volume for a long time, but it was absolutely awesome. I could not have chosen a better album to unleash my frustration.

And now the day would once again be mine!

This is the third post I’ve written on blues rocker Joe Bonamassa. My previous articles covered his DVD Live From The Royal Albert Hall and his last studio recording The Ballad of John Henry.

The release of Black Rock in a few days sees Bonamassa once again team up with producer Kevin Shirley. (Black Crowes, Aerosmith) The album was produced in Santorini, Greece and named after Black Rock Studios where it was recorded. Like several of his previous releases, Bonamassa combines original tunes and covers. This time he does renditions of songs previously recorded by Bobby Parker, John Hiatt, Jeff Beck, Leonard Cohen, Otis Rush, Willie Nelson, James Clark and Blind Boy Fuller.

Black Rock begins by knocking the roof off with two heavy blues numbers, “Steal Your Heart Away” and then “I Know a Place.” These songs set a thunderous tone and just the right vibe for the present circumstances I mentioned above. Joe adds some classy slide playing on the edgy third track “When The Fire Hits The Sea,” and “Quarryman’s Lament,” has some exceptional acoustic playing with a nice Mediterranean touch.

I really enjoyed the updated take on “Spanish Boots,” Beck’s tune from 1969’s Beck-Ola with Rod Stewart. I found myself replaying this track several times. “Bird on a Wire” is going to surprise a few people who are familiar with Leonard Cohen’s song. With all that Greek flavoring it makes for a distinctive sound indeed.

Otis Rush’s “Three Times a Fool” takes things back to a more traditional vibe as well as “Night Life”, the song that re-unites Bonamassa with blues legend B.B. King. (It was B.B. who let Joe open for him over 20 years ago when he was only 12 years old.)
(Photo by: Christy Goodwin) 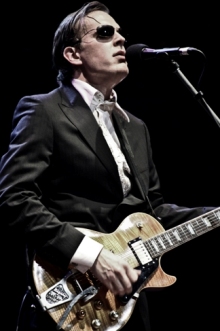 Bonamassa continues to gain a reputation as the new master of blues rock guitar. However with each new release, people are starting to take notice of his voice. It just keeps getting better. This is very apparent on his Zeppelin-esque “Wandering Earth.” And “Blue And Evil,” two out of the five Bonamassa penned tunes featured on Black Rock. Exploring new avenues another original “Athens to Athens” helps lead us down his road to discovery.

With the closer “Baby You Gotta Change Your Mind,” Joe cools things off in a short playful manner with an acoustic version of Blind Boy Fuller’s classic; a really nice way to cap off a thoroughly enjoyable listen… With the news of Black Country, Joe’s latest collaboration with Jason Bonham, Glen Hughes, Derek Sherinian, the future just keeps looking brighter for this hard working rising star.

After Several Listens to Black Rock

All was silent once again. Off in the distance I heard someone shout, “You Rock!” Hmm interesting, perhaps there was some hope after all… I couldn’t help but chuckle to myself thinking how during the course of my little scene, I was not only able to write this post, but also accomplish a few of the chores around the house and enjoy myself along the way. Once again proving the motivating force music can play on a person’s mood. If you’re a Joe Bonamassa fan then Black Rock, his 10th solo album, should be right up your alley, and perhaps make your afternoon that much brighter too.

How familiar are you with Bonamassa’s impressive 20 year career? Are there any highlights you’d like to comment on? I’d love to hear your feedback! If you enjoyed this post, then spread the word. If you looking for more information and updated touring schedule, then you can visit Joes’ site by clicking here.